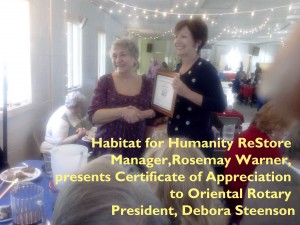 Thanks to Rotary contributing over 400 person-hours, the  following items were accomplished at Habitat:

1.  Modify various shelves by cutting in half and reconfiguring

2.  Remove glass tops from above shelving

5.  Identify breakers and match to outlets and lights

6.  Reconfigure outlets and make adapters for checking out clothes dryers

10. Block off vents in back room to keep heat in

12. Install shut off valve to isolate plumbing in Habitat building

14. Open up two doorways and construct two new ones

21. Move computer systems to new building and convert to wireless

22. Create window in office to view middle of building

26. Helped move various items from old to new store including the work trailer

28. Increased the net profit of all the restaurants in a 5 mile radius

Jim Berry  – Constructed dividers – Some of which are straight.  He also reminded us that if it can’t be fixed with a hammer, it’s an electrical problem!

Doug Carmichael – Computers – Not saying it’s his fault, but coincidentally, there were statewide computer crashes

Tim Fowler  – As directed due to having no useful skills whatsoever

Marc Kaplan – In addition to his other work, was continuously getting high.  Atop the ladders, that is

Bill Manger – Worked on just about everything, but mostly known for the taping and painting to hide our mistakes.  He also installed the hidden wall

safe.  Which reminds me – the Habitat staff is still looking for it.  Has anyone seen it

Joe Mattea – Excellent ladder holder, took photos and brought the bull horn which enabled me to talk even louder

Chris Matthewson – Did not burn the building down with wiring jobs.  However there are rumors of massive county wide blackouts